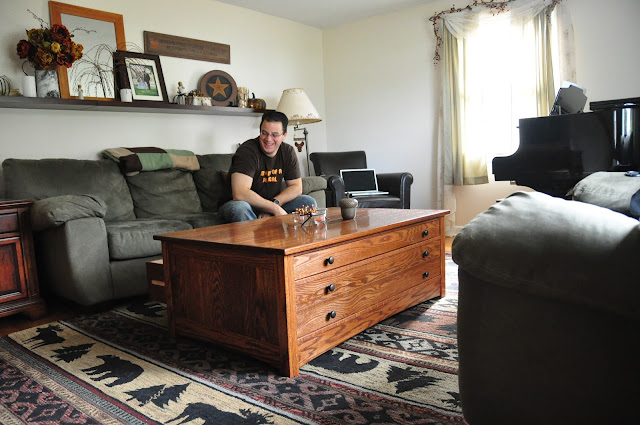 Laura & Dan asked if I would make them a coffee table as their wedding gift. I asked them what kind of coffee table they wanted and they asked me to recommend something. I pointed to one in a Stickley catalog that I wanted to make for myself someday, when my skills are up to it. "Yeah, that looks good. We want that one." ¬.¬

So, smart guy that I am, I figured that it would be faster and easier if I built two tables at the same time, one for me, one for them.

You spend twice as long milling lumber in the early stages, because there's twice as much. You save a little bit of time making the parts because the tools are set up and you just push more blocks of wood through to make extra parts. But then you have to sand everything, assemble everything, and finish everything... and all of that just doubles the time required.

This project took so long, for so many weekends in a row, that it became an exercise in endurance more than a hobby of enjoyment. I almost gave up on woodworking altogether. I definitely got in over my head.

Because I didn't take the extra 45 minutes to drive to the Stickley show room to actually look at the furniture I was trying to copy before I made my own, I guessed at the internal structure. There are mistakes. I see them every day. They bug me. But I'm not going to make another one of these. No way.

One of Dan's friends even asked me if I'd make him one, said that he's willing to pay for it... I turned him down. It was too unpleasant of an experience. But I'm glad Laura & Dan like the gift and that they take good care of it.

Making two tables at the same time under the logic that it will be faster because you won't have to set up all the tools to cut the same measurements will only save you time up to the point where you begin milling lumber, assembling, sanding and finishing.

Only sand to 180 grit! Sanding to a high grit / super smooth surface actually prohibits stain absorption. I sanded a test piece to 220 grit so I could determine how many coats of stain to apply. It took 5 coats to get it to a the shade I wanted, but it looked very zebra-stripey where the dark grain kept getting darker and the light grain just wouldn't absorb anymore stain. I sanded the tables to 180 grit and it only required 2 coats of stain and everything looks a lot more even tone.

It takes at least 3 (and ideally 4) coats of Polyurethane to lock the wood and provide a decent level of protection. 1 coat is almost completely absorbed into the wood. 2 coats a little less so. And the 3rd coat mostly stays on the surface. A final 4th coat is probably as far as I would go on anything. I think I put too much poly on these tops.

If you have an opportunity to look at the piece of furniture you're trying to mimic before you begin building it, do so. The Stickley showroom is 20 minutes away. I could have learned a lot by looking at how they built this table. Instead, I just looked at the photo in their catalog and guessed at the internal structure. A fun problem-solving exercise, but I missed the mark a little bit.

You don't necessarily have to buy 12/4 stock to get a 2"x2" leg. I started with 8/4 stock and tried to wrap each leg with 1/4" mitered panels so that there would be face-grain on every side (like Stickley does), but that was a complete disaster. None of the miters were accurate and the water from the sponge I was using to wipe up the excess glue caused the joint to swell open and the glue dried with very visible gaps at the corners. I ended up cutting the leg stock down to 1"x1" and adding 3/4" stock to both sides to end up with 2 1/4" x 2 1/4", and then planing down until a perfectly square 2"x2". On several of the legs, the grain matches so well that you can't even see that it's made up of multiple boards.

Always choosing the most complicated / difficult method of setting a drawer isn't always the smartest thing to do. There's a reason other methods exist. Sometimes the simpler solution is actually better. I ran into a problem where the mid cross-bars on one of the tables had a small bend in it, causing the entire cross-bar to bow and block the drawer opening by 1/8". Unfortunately, the manner in which I constructed the interior of the table wouldn't allow me to straighten these boards so I had to sand the top edge of the bottom drawers until they fit.

If I could build this table again I would have built full drawer-bay bottoms of 1/4" baltic birch plywood, framed with 3/4" boards all the way around. The plywood would keep every board perfectly straight, avoiding this problem entirely. If I had built it this way I would have been able to mount the drawer with side rails or the much simpler gravity slides. In this situation, a simpler solution would have avoided the problem entirely and the end result would have been a lot sturdier.

My brand new flush-cut handsaw is broken. I bought a flush-cut handsaw to cut off the pegs and no matter how I held the thing I kept scratching parts of the legs I didn't want scratched. I either need to actually practice, only use it on unfinished surfaces, or get a better saw. A nice alternative I might try next time is to only drill holes to an exact depth, and only use pegs an exact length, with a chamfered end cap so that I don't have to saw anything off at all.
I rounded over the edges a bit too much and it ruined a bit of the aesthetic appeal of the Stickley version. Next time I'll just ease the edges with some hand sanding.

A 12 hour day in the woodshop isn't fun. Three 12 hour days in a row just plain hurts. And I stop having fun when a project takes this long (3 months). I need to pick smaller projects, stop doing two of everything, or adjust to a more casual pace in order for this hobby to be 100% fun.

There is great satisfaction in finally completing a project that you thought was beyond your ability. It may not be perfect, and these tables do have some flaws, but I made it out alive, I still have all my fingers, and this is the first table I've made that doesn't wobble! Woo!
There were several firsts in this project:
I give myself an 80% on construction and 110% for effort.
Posted by Anonymous at 3:30 PM