It happens every time I design something and walk away for a few months.  When I finally look at the idea again, it's not quite good enough.

Make a bunch of cubic rectangles and put them together, right?

This was my first "final" draft.
It didn't take long for me to get sick of it.  It's too blocky, too thick.  It needs refining.


I spent another week on it and came up with a spindle version which became the next "final" draft.

I added a bevel to the underside of the top to lighten things up a bit, played around for awhile trying to find a spindle pattern that wasn't too plain, removed the double tenons and added a slotted dovetail drawer blade.   This remained for 3 or 4 months as the plan.

Fast-forward to today.  I opened the Sketchup model again and can't shake the feeling that I still hate how boxy and heavy it looks.  I also hate dusting between spindles and swore I'd never build spindle furniture.  I thought it needed something, but this isn't it.  It's too dark, too heavy, too boxy.

One proven strategy for lightening the look of pieces like this is to taper the legs, but no.  I'll save that for the Shaker bedroom set I'm going to build for the boys.

Flare the legs out?  Definitely not.  For our taste, some of the Mackintosh pieces are too wide-bodied, and the Asian-inspired Arts & Crafts fusion isn't our bag.

The main reason we avoid these more vocal styles is that we're trying to find a universal aesthetic that fits with the rest of our home, even as styles change.  The end tables need to match the coffee table (already built) and everything needs to blend in with craftsman, rustic, lodge or whatever decor my wife decides to fill the room with.

A lot of Arts & Crafts furniture is big, boxy, heavy, bulky, strong, solid.  I think the real exercise here is to stay within the Arts & Crafts genre, but be as airy and lightweight as possible.  This is probably why we lean toward the Harvey Ellis style with his graceful and uplifting arcs.

I spent a good few hours today nudging things around.  I decreased the thickness of the top from 1" to 3/4" and that lightened it quite a bit.  I raised the skirt to add a bit more air underneath and deepened the arcs to increase the uplifting effect.  Instead of having a plank spanning the entire width of the table, I left room on each side to let even more air and light through.

At one point I had the plank through-mortised into the front and back skirts, but decided it added too much noise, drawing too much attention to itself.


We're trying to maintain a bird's eye view of the entire living room set across several years of separation (as I'm rather slow at building things).  Every stylistic decision here would have to carry through to the other pieces of my living room set.  So she also vetoed the Limbert-style gridwork plank approach I toyed around with at one point, too.

Right now I feel pretty good about this.  I'll let it simmer for a week and come back to it with fresh eyes and see if it needs more tweaking.  Lots of Golden Ratio dimensioning again, because it's fun.  In the future I want to play around with Jim Tolpin's By Hand & Eye approach. 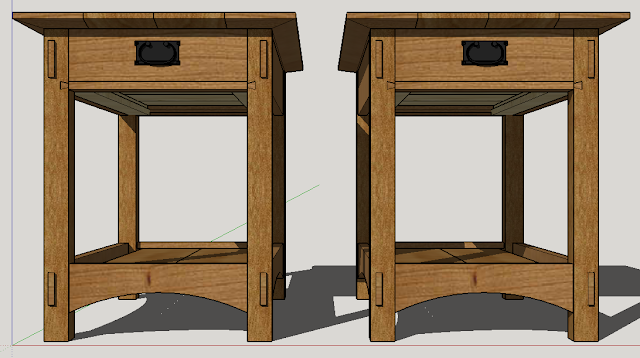