Q&A - What would I do differently?

Round 3 of Brady Kirkwood's Q&A for the Jewelry Armoire / Lingerie Chest build he's going to undertake.  He graciously agreed to let me publish his questions alongside my answers in case anyone else finds use in them.

I wrote up a "What Went Wrong" summary at the end of the project.  I'll pull some from there.


New addition to the list, after living with the dresser for a couple years and looking at it every day....

The front drawer blades are displaying flat sawn grain.  I find this incredibly distracting.  I really wish I trimmed a piece off, rotated it and glued it back on so that these blades would display quarter sawn grain to the viewer.


To Simplify the Assembly Phase

My advice is to dry-fit as many times as it takes until you memorize the order.  Tune the fit of every joint that shows the first sign of binding.  The time to tune isn't when the glue is on.  :)

If you choose to not do the side panels, you can do an initial assembly of legs + top frame + skirts.  That will lock in the core length / width / depth dimensions of the entire piece.  Then you can take your time and put in one web frame at a time.  A much more methodical and relaxing process 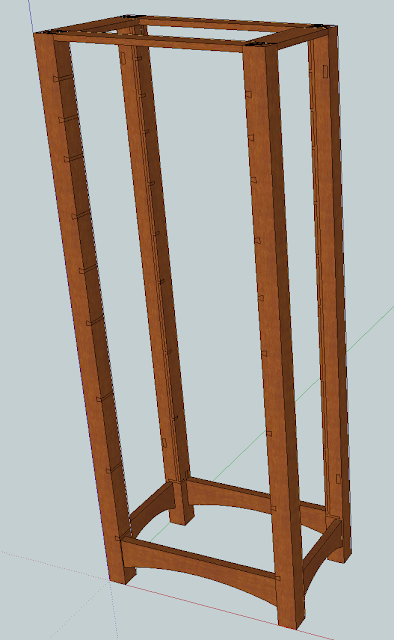 Hmm...  perhaps there's another way to get those side panels in after the fact.  Maybe treat them like glass panels.  Put them in place after the initial glue-up and then tack or glue on a little strip of wood to hold them there and to hide the edges of each panel.  Like so... hm..... wait... no.  Never mind.

If you're going to put the side panels in after the fact, you might as well just put one tall panel the size of the door bay.  Or even better, you could do thin, narrow, shiplapped planks in there running vertically.  That would certainly simplify the main carcass assembly, allowing you to break it out into stages.  It also maintains a consistent overall aesthetic.  Not too shabby! 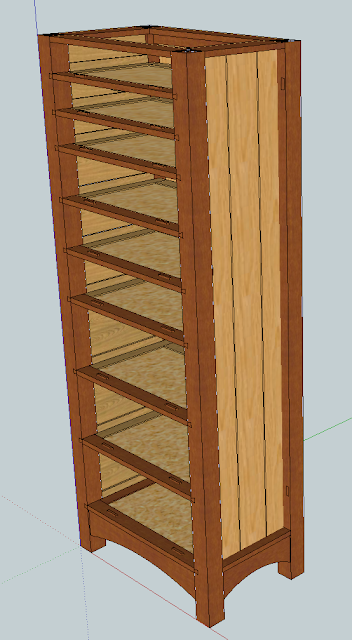 Stage 1: Legs + Skirts + Top Frame + Back (and Side) Mounting Strips (something to screw or nail the shiplapped planks into)

Stage 2: Glue and tap in one web frame at a time.  They are pretty much self-clamping, especially with the plywood panels holding them to their exact width, pressing them into the leg notches.

Stage 3: Screw or nail on the shiplapped planks onto the back and inside the door bays
Stage 4: Glue on the rabbeted Drawer Guides, attach the TopStage 5: Make and mount the Doors & Hinges, tune the fitStage 6: Make & fit the DrawersStage 7: Attach the Drawer Stops, Door Catches, Knobs

There's probably more, but this is off the top of my head...By removing the side panels and their captive grooves, you will be able to reduce the width of the web frame sides, as some of that material is now unnecessary.  This will allow you to have 3/8" thick shiplapping for the door bays and end up with the same internal volume I did.  But if it were me, I'd make 1/4" thick shiplapping, as every bit counts in that cramped space.

I spent a lot of time trying to figure out a way to maximize the storage space in there without sacrificing wood strength or creating weak wood joints.  The easiest option is to have wider legs, pushing the doors out farther, but I wanted to keep it looking as slender as possible.  It's a tight space and a difficult puzzle to solve.
Posted by Steve Erwin at 11:57 AM