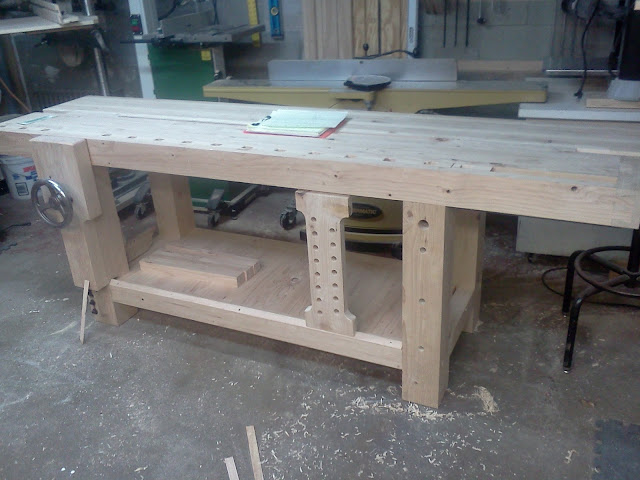 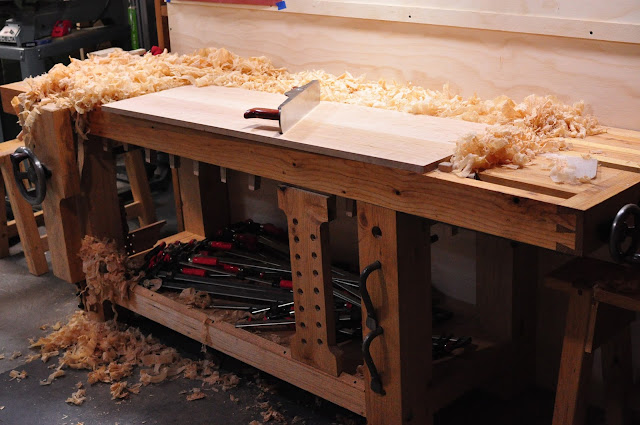 I got into handtools

I'm not really sure where this idea came from. I've been reading a lot of woodworking magazines and books, watching entire backlogs of woodworking tv shows and instructional videos... Somewhere along the way I ended up adopting the notion that, for certain operations, hand tools are more efficient, safer, quieter, and more enjoyable than power tools.


A handplaned surface is ready for finish.

No sanding required. And I hate sanding. That might be reason enough to buy a handplane, but it wasn't the main reason I was drawn to hand tool use.

I really hate them. I hate the noise they make, the dust they make, and I never feel in control of this particular tool. All too often after I've spent a dozen hours creating a part, I pick up a router to put on some finishing, decorative touches, only to have the tool slip, blow out the end grain, the depth stop vibrates loose, the bit slips in the collar, or I don't move fast enough and burn the wood. That's a lot of baggage for something that's just supposed to give me a decorative touch.

On the Mission Storage Coffee Tables, each table had 4 drawers. Each drawer had half-blind dovetails in the front and through dovetails in the back. My brother owns one of those big fancy Leigh dovetail jigs. He loves it. I spent 5 hours one Saturday setting it up, making test cut after test cut after test cut until I was confident that I had it set up correctly for my parts. Then I took two more test cuts just to make sure. By the time I finished dovetailing all of my parts the clock stopped at ~8.5 hours. And while I'm a beginner at the Leigh jig, I had a similar experience on the first coffee table I built, using a much simpler Craftsman dovetail jig. It still took me 5 hours, and that was for a single drawer.

So in my free time, I started watching videos of other woodworkers cutting their dovetails by hand. I started noticing how different handcut dovetails look compared to router-cut ones. I drank the kool-aid and fell victim to the snobbery that true fine furniture has hand cut, delicate dovetails.

Eventually, after reading and watching enough Christopher Schwarz, Frank Klausz, and Rob Cosman, I became convinced that cutting dovetails by hand can, and usually is faster than fighting with a temperamental router and fussy jig. Faster, and a helluva lot safer and cleaner. It even looks more enjoyable. (Seriously, watch that Frank Klausz video.)

I can't fit power tools in my non-walk-out basement. So if I want to do any woodworking at home, hand tools is really my only option.

So I bought a few planes, got a bunch of tools as gifts for Christmas and birthday presents and the first thing you learn when you have hand tools is that you really need a workbench. I spent the next few months learning about and eventually building this particular style workbench.

And since I know that I don't know what I'm doing, I hazard on the side of being a cheapskate when I can. I don't think it makes sense to buy mediocre tools, but when it came time to buy lumber for the workbench, I picked Hem-Fir.  This was mostly an informed decision from an article Schwarz wrote about a $100 workbench in which he described the strength and stiffness of construction-grade lumber and how, for the budget-conscious, it's a perfectly good material for building workbenches.

Now that the bench is done, I notice that it dents pretty easily. While I was building it I noticed how many knots it has. But I got a 400lb workbench out of $150 worth of lumber by adopting the logic that if I mess it up, I'm only out $150. If I decide I want different wood later on, I'm only out $150. Or I can keep it as a second sibling bench (if I actually had room for it). Or I can sell it. Or I can hand it down to one of my brothers. I have options. $150 doesn't hurt. If I had invested $750 in ash and screwed the whole thing up, or decided I don't want to do hand tool woodworking after all, then I'd be a little more uncomfortable. But $150 is easy.

I'm not super disappointed in my decision to use Hem-Fir. The bench is super functional and does almost everything I want it to do. And since I'm a newbie, I don't even know how to use it to my best advantage. I'm still learning here and there when I see other woodworkers using their benches.

The vises were made by Benchcrafted.  I decided to go with them because they kept winning the Tool of the Year awards with various woodworking magazines.
Posted by Steve Erwin at 10:49 PM