I didn't have much trouble mortising the hinges onto the back of the chest.  Mostly chisel work and finishing it up with the router plane.  Easy peasy, nice and relaxing.

I need to buy a drill bit centering marker jobbie because two of my hinge holes were a little off.  I made a few "toothpicks", added a little glue and shoved them in, let them dry, cut them flush, and drilled the holes in the correct position.  Worked nicely.

It took me a few minutes to figure out how to transfer the hinge locations to the underside of the lid.  With all of the hinges in their closed position attached to the back of the chest, I rested the lid in position so that it was flush to the back of the rear legs of the chest.  I took my marking knife and marked the sides of each hinge, cutting a little mark into the underside of the lid.  Easy enough.  But how was I going to measure how far inward onto the lid the hinges project?

Using a pencil, I marked where the lid overlapped the cylinder of the butt hinge.  Then I set my marking gauge to the distance of the front of the hinge to that pencil line and used this gauge setting to mark the distance the hinge reaches onto the lid.  None of that probably made any sense.  I was focusing too much on not making mistakes to bother getting the camera.  Sorry.  More chisel work and router planing finished up those hinge mortises.

The Problem with Fancy Brass Screws

Then it was time to screw the hinges on. I thought I pre-drilled large enough holes, but the very first brass screw I tried to drive in snapped off.  I had to go buy a pair of needle nose pliers and chisel around that screw in order to get a good grip on it.  Crossing my fingers, I managed to get it out.  /phew!

After that, I practiced on some scrap white oak until I found the correct diameter drill bit that would allow the screw to go in smoothly.  Not trusting the weak brass, I used some harder metal ones (of the same "number") to establish the thread with less likelihood of snapping.  I did this to all 24 screw holes and then used the brass screws with confidence (and paraffin wax, too, just because I'm paranoid).  I didn't even risk using a power drill.  I screwed them all by hand so I could feel for any resistance that might bend the brass.

Then I had to figure out how to hold the lid in position so that I could attach the lid to the base.  I cut two pieces of wood to the exact height of the bench legs, and two longer pieces.  Then clamped them to the bench so that the lid could rest on the shorter boards while the longer ones acted like arms holding it at 90 degrees.  Thus I was able to lay the hinges into the corresponding hinge mortises so that I could screw them in along the back of the bench.  I even took the time to clock my slotted screw heads.  /Screw-snob! 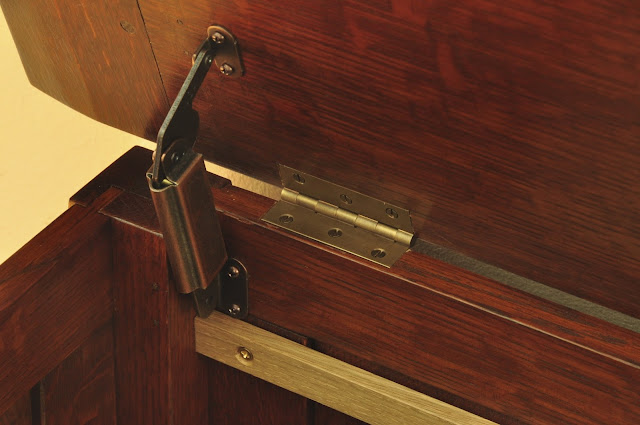 Clocked screw heads, and you can just make out the "toothpick" repair on the inside of the leg (to the left of the lid support).

I wanted the lid supports to be mounted to the 2"x2" legs so that the sliding till would have more room to slide around.  So that's what I did.  And as soon as they were attached, I took one last look and began to literally and figuratively shut the lid on this project.  ...which is how I ran face first into yet another mistake.  The lid stopped closing 5" above the top of the bench.

The geometry at play requires that the lid supports be mounted to a back panel that is 3/4" thick.  By mounting it 2" from the hinge pivot point, I ended up with 8 screw holes to plug and hide.  So it is what it is, and not what I thought it was going to be.  I moved the supports to the back rail, which happens to be 3/4" thick, and they work as advertised.  Lesson learned.  Know your hardware.

4 screws each.  Easy peasy.  I put a healthy amount of wax on the rails and a couple more coats of wax on the tray.  The tray slides all the way across with the flick of a finger.  Much better than I expected.

I measured, drilled and attached the hooks to the mirror and attached the cleat to the back and mounted it on the wall.  My wall is bowed in two directions so the mirror wasn't sitting flat.  I went and bought another cleat to help suck the bottom in and prevent it from bouncing so much.  My next house will have flatter walls.

That wraps up all the hardware.  Next up: The End!
Posted by Steve Erwin at 8:00 AM